PRIAA is an outstanding non-profit organization in Rhode Island, dedicated to promote civic and cultural awareness for the Puerto Rican and Latino community through the performing and fine arts in Rhode Island.

As part of her Puerto Rican culture and identity, she began learning Afro-Puerto Rican Music and Dance (*Bomba) and other rhythms from the Caribbean when she was a little girl. Her mastery and dedication in those rhythms gave her the idea of bringing that knowledge to the Puerto Rican and Latino community. She started in 1994 with Plena music and one vegigante one year before she introduced the Bomba music. In 1995 the first Bomba group of Puertorriqueños Unidos was Cuembe Dance group, coordinated by the Director of Arts and Culture of Puertorriqueños Unidos, Arlene Ayala.

In 1996, Lydia invited Mr. Carlos Cruz Cruz, a "proclaimers of black verse", director of the original "Yoruba" group in Puerto Rico, and Bomba artisan from Santa Isabel, Puerto Rico, to her first Bomba and Plena activity as a non-profit organization in Rhode Island. He brought with him a Bomba drum and left it as a gift to Lydia with the condition that she continue to promote Bomba music and rhythms. Lydia's collection has since grown from one Bomba drum and a trio of "Panderetas de Plena" to nine drums and six sets of Panderetas.  It was at this point she founded Yoruba 2 in honor of Carlos Cruz. Her hard work and brilliant commitment to spread the music of Bomba and Plena everywhere, earned her the name of Master and Ambassador for the “Bomba” and "Plena" Arts in Rhode Island.

She has been working directly with the Puerto Rican community in "Fiesta de Pueblo" in Central Falls for eight consecutive years. She also has working with the arts curriculum education in local elementary, middle and high schools with Caribbean history. She is an arts educator and artisan in regards in making traditional masks. With her multiple discipline in the arts, she assembled smaller “Bomba” and "Plena" groups with children and youths throughout the state. She was volunteer worker as an  artistic director for the Art section in American News, a New England newspaper. She documented her work and shared the outcome of success with the community.

She has worked with numerous non profit organizations, after school programs, galleries, museums, Department of Tourism, both in the State of Rhode Island and in Puerto Rico, and with the Instituto de Cultura Puertorriqueño. She has taught at the Springfield School Department in the Explorations in Puerto Rican Culture from 2007 to 2009, during which her Caribbean Island Programs were a success. Lydia and Yoruba2 brings a variety of Puerto Rican and Caribbean culture to school, universities, and communities bringing to the public the authentic folklore of her beautiful island.

As a National Level, Lydia represented New England in Southern Arts Federation, she received the American Tradition 1999 and 2000 fellowship awards, sponsored by National Endowment for the Arts with the Traditional Artists Program.

Ms. Lynne McCormack, director of Art, Culture & Tourism in Providence, said: “Lydia contributes to promote the advancement of cultural opportunity and economic prosperity for the City of Providence and its residents”. Lydia brings to Rhode Islanders energy, harmony, happiness, diversity and respect.

"Lydia is an extremely talented artist and ambassador for the AfroCaribbean culture. Her knowledge and ability to entertain while teaching is legendary” October 20, 2011 Pablo Rodriguez, MD, President and CEO, Women's Care.

“Lydia is a highly motivated, energetic, enthusiastic, innovative and dedicated artist/arts administrator. She has done a tremendous job of education, community outreach and promotion of Puerto Rican Culture in the region.” October 20, 2011; Steven Pennell, Coordinator Urban Arts and Culture, Univ. of Rhode Island.

"Lydia Perez brings a dynamic level of professionalism combined with deep creativity to all her work. She is a natural educator and a master dancer who enlivens others as she works" .October 26, 2011, Paddy Bowman, Director, Local Learning: The National Network for Folk Arts in Education.

In 1999, PRIAA in partnership with the Instituto de Cultura Puertorriqueño and with the collaboration of The Rhode Island Foundation brought to Rhode Island the exhibition of “Past & Presents, Santos de Puerto Rico”.
Past & Present: Santos of Puerto Rico, a scultural exhibition that showcases a unique form of Puerto Rican art and culture-with traditions dating back to the sixteenth century, after the Spanish colonization of Puerto Rico. Thank to the efforts of the Puerto Rican Institute for Arts of Rhode Island and the Instituto de Cultura Puertorriqueña of San Juan, Puerto Rico, more than 100 objects has been exhibited for the public throughout the state. Santos was presented at: Rhode Island Foundation, Providence Public Library in Providence, Warwick Art Museum, RI, and The Rhode Island Historical Society Museum of Work and Culture, Woonsocket, RI. PRIAA has brought to Rhode Island artisans such as: Jesus and Margarita Torres (Fish Scale Jewelry); Master Jose Lazzu (Coconut Jewelry); Jesus Cepeda, Carlos Cruz Cruz and Juan Fuentes, Master and artisan of Bomba and Plenas Instruments; Norberto Martell Morales, Reinaldo Figueroa, Mabel Oquendo and Ángel Sánchez, makers of Vejigantes figurines and masks; and Tony and Adruey Ayala (Saint carving from “La Gubia Dorada”.

The Puerto Rican Institute for the Arts and Advocacy Inc., has received from the Rhode Island Foundation the 2007 Award of Economic and Community Development Award as a fiscal agent for Latino Public Radio (LPR) to help further establish an important communication tool for the Latino communities in Rhode Island. 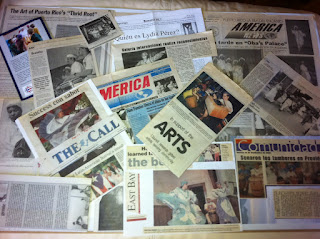 The contribution of Lydia Perez in Puerto Rican arts has brought to the City of Providence a great diversity and respect for the Puerto Rico culture. The National Puerto Rican children group “La Rondalla de Puerto Rico”, the “Guarayson” Quarter, and the International groups “Los Pleneros de la 21” and “Mapeye” are examples of high quality Puerto Rican music which has seen exposure in Downtown Providence.

Lydia has had performed in such prestigious venues as: 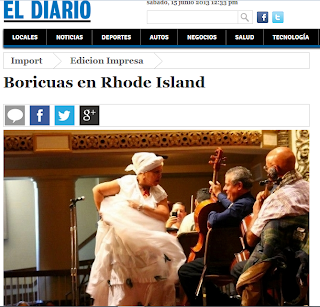 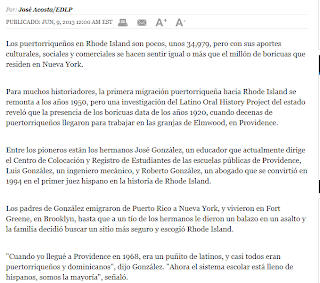 Lydia is Member of National  Association for Latinos Arts and Culture (NALAC), Chair of Rhode Island Latino Network,  member of "Coalición de Artistas de Puerto Rico",  an artistic associate with Teatro Vida in Springfield, MA, a Teaching -Artist of Hartford Performs in Connecticut and the Rhode Island Teaching-Artist Center, (RITAC). She is in the roster of  Rhode Island State Council on the Arts, (RISCA) and the Creative Ground of New England for the Arts, (NEFA).  She was a member of the Cambridge Who's Who in Boston,    commissioner for eight years in the Warwick Affirmative Action Commission and four years with the RI Governor’s Hispanic Affairs commission.

PRIAA is a member of  Creative Ground of NEFA, Hartford Performs, Connecticut an National Association of Latino Arts and Cultures, (NALAC).

The Caribbean Arts Program  is a program in which we engage school teachers, children, youth and parents in our Caribbean tradition. We teach different form of rhythms hailing from the Caribbean Sea using the traditional instruments while incorporating other traditions, like dance, mask making, costume showcasing, and poems reciting.

*Bomba is an African style of music and dance that flourished along the coastal region and sugar cane fields of Puerto Rico, where a lead singer chants short vocal calls to which the group sings fixed responses; sometimes described to be a challenge between the lead dancer and the lead drummer, where the drum has to follow the movements of the dancer with a synchronized beat.

Plena- a traditional style of music developed most prominently on the coasts of Puerto Rico; using improvised call-and-response the singers narrate about current events and their daily lives, often in a satirical manner; often called "the Sung Newspaper" because of its use to spread news and gossip, to criticize, protest, to censor, or just for enjoyment.  See Plena with Yoruba 2, Click here


**Vejigante: Mythical figures from town festivals and folklore in Loiza and Ponce, Puerto Rico. Characterized as evil spirits meant to scare people back into the church, they symbolize the Moors that St. James, patron saint of Spain, had fought and vanquished. Masks made from coconut and paper maché s come in may bright colors and costumes with bat-like wings further the frightful appearance of the Vejigante. Their name derives from "vejiga" meaning bladder and "jigante" meaning giant due to the custom of blowing up and painting cow bladders which are carried by Vejigantes.  See our Masks:
See our Video of the  2014 Vejigante Exhibit. Click here
see our Vejigantes masks: Click here

Promote Your Page Too